SUEZ is a leader in innovative technologies and processes for the treatment of contaminated soils, minimising their environmental impact and creating significant potential for reuse.
Sustainable soil solutions

Australia’s only facility for zero residue treatment of contaminated soils

The SUEZ Ventia Contaminated Soil Processing Facility in Melbourne’s south east is an EPA-approved, low cost solution for the safe treatment of organic and inorganic contaminated soils.
The SUEZ Ventia Contaminated Soil Processing Facility is a partnership between SUEZ and Ventia and harnesses the extensive expertise of both partners. SUEZ owns and operates Victoria’s only landfill licenced to receive category B solid Prescribed Industrial Waste, while Ventia has delivered more than 140 successful and highly complex remediation projects across Australia over the past two decades.

Both processes are designed to leave zero residues for optimal reuse of soils, with residual waste sent to an on-site smart cell® where it contributes to the generation of renewable energy.
The thermal desorption process

How do we remove organic contaminants from soils? 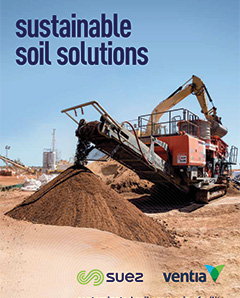