The Neerabup ARRT is one of the most advanced waste processing sites of its kind in the country.

SUEZ’s ARRT facilities can divert up to 55% of waste from landfill by turning household and commercial waste into compost. SUEZ’s ARRT facility in Neerabup, 31km from of the Perth CBD in Western Australia, was completed in 2009 at a cost of $80 million. The facility is also the largest facility of its type in Western Australia with 15 employees. The facility uses drum composting technology and automatic compost turners to recover and recycle valuable resources back into the local economy.

“The Neerabup ARRT is one of the most advanced waste processing sites of its kind in the country, using multiple stages of refining to create valuable products out of everyday food and garden waste.” SUEZ State General Manager WA Nial Stock said.

The whole composting process takes approximately 31 days, where the waste is initially composted then a primary sort is undertaken to remove large contaminants. The plant receives approximately 100,000 tonnes of waste material in a year from households in the Mindarie Regional Council area, which is converted into around 28,000 tonnes of compost.

“The compost can be used in agriculture or horticulture and at mine sites and other rehabilitation projects to replenish severely degraded soils.” Nial said.

of compost converted per year from 100,000 TONNES OF WASTE MATERIAL
The results
The final product has been used at various project sites across Western Australia, including the building of the Bunbury-Forrest Highway.

SUEZ is Australia’s most experienced provider of ARRT solutions to local governments and commercial and industrial waste generators. 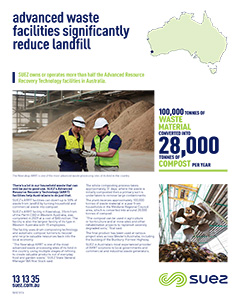