The award-winning Victorian Desalination Project is the most technically advanced, environmentally friendly and energy efficient desalination facility in Australia, and meets around 30 per cent of Melbourne’s water requirements.
The mission

Climate change and drought remain the biggest challenges to water supply in Australia. In 2007, the Victorian Government released a long-term plan to guarantee a secure and reliable water supply for the state’s growing population and economy, including a range of initiatives to diversify and boost water supplies in major urban centres.

Critical to the plan was the construction of a new desalination plant to provide around 4.5 million residents in Melbourne and neighbouring regional areas with a rainfall-independent fresh water source.

The Victorian Desalination Project is home to one of the world’s largest reverse osmosis desalination plants.

State of the art

The Victorian Government contracted AQUASURE, a consortium of SUEZ, Thiess and Macquarie Group, to finance, design, build, operate and maintain the Victorian Desalination Project for 30 years.

The $3.5-billion project features an advanced environmentally sustainable design and includes one of the world’s largest reverse osmosis desalination process plants, using 51 reverse osmosis racks and 55,000 membranes to remove salt and other dissolved inorganic solids from the seawater.

The plant was commissioned in record time, meeting 100 per cent of quality and efficiency targets and transitioning seamlessly to the operation and maintenance phase.

The plant’s design minimises negative impacts on the local landscape, flora and fauna, communities and cultural heritage. Its living green roof – the largest in the southern hemisphere – links the site the coastal landscape and helps limit visibility of the industrial buildings. A 225-hectare ecological reserve constructed around the plant preserves biodiversity and offers public recreational space.

The plant’s reverse osmosis technology, compact modular design and myriad of efficiency features reduce its energy requirements, and 100 per cent of it energy use is offset by renewable energy certificates.
The results

The future of fresh water

The Victorian Desalination Project produces up to 150 gigalitres of desalinated water each year, with upgrade capacity to 200 gigalitres. 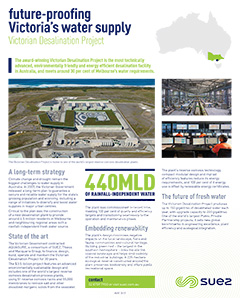 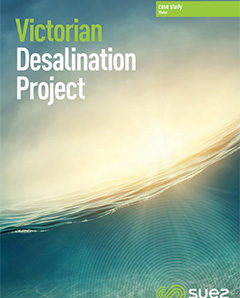