At the turn of the century, Western Australia’s natural water supplies were becoming depleted as a result of extended and severe drought, with water flows dropping by almost 30 percent in the eight years leading up to 2005.

The state implemented urgent medium term drought recovery plans to respond to the issue, including water restrictions and additional groundwater allocations. But ensuring the future of Perth’s drinking water called for a long-term diversification of its water strategy.

The Perth Seawater Desalination Plant provides the city with a safe, reliable and sustainable source of drinking water.

In late 2004, the state-owned Water Corporation called for tenders from prequalified bidders for the design, construction and operation of a seawater desalination plant at Kwinana, around 30 kilometres south of Perth CBD.

A joint venture between SUEZ and Multiplex Construction was awarded the contract for the 45-gigalitre per annum Perth Seawater Desalination Plant (PSDP) in April 2005.
In November 2006 – just eighteen month after construction commenced – the plant delivered its first water order. The PDSP was the first large-scale desalination plant in the southern hemisphere, and at the time was Australia’s biggest seawater reverse osmosis plant in Australia.

The system allows for full pressure and flow control, automatically compensating for temperature fluctuations and membrane permeability and minimising energy consumption.
The water produced undergoes remineralisation to meet stringent drinking water quality standards. To keep its footprint light and protect the local marine ecosystem, the PSDP employs advanced brine dispersion technology to disperse and dilute discharge. Innovative energy-saving measures, such as pressure exchangers to harness residual pressure from discharge and divert it back into the system, deliver a reduction of around 20 per cent.
The results

With its cutting-edge technology, operational efficiency and novel design, the PDSP is helping mitigate the effects of drought with minimal environmental impact.

Reducing total reliance on rainfall is a critical step in ensuring clean and safe drinking water for Perth’s population well into the future.

of fresh water supplied to 2M people each year 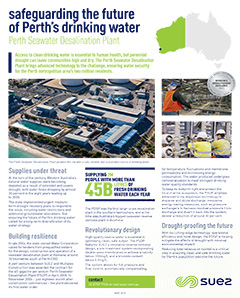 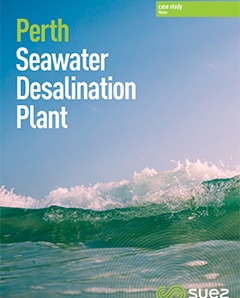